10 Questions with the Cheatham Lab

Where did you grow up?

I was born in Apalachin, NY but moved to Holly Springs, NC when I was 8.

What book that you read when you were younger have the biggest impact on your life? 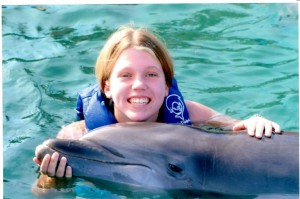 A Tree Grows in Brooklyn by Betty Smith. I read it in 7th grade for school. It was the first book that I read with some guidance by a really good teacher, and I loved actually thinking about the themes in the book. Plus, it’s about a young girl growing up, something I could connect with at the time.

If you were to choose a completely different career path, what would it be?

Professional tennis player. If I could have gotten that good, I totally would have continued playing.

Where is the best place to eat in the (ex. Kannapolis, Chapel Hill) area?

In Chapel Hill, the best place to eat depends on what you want. 411 West has amazing Italian food, Top of the Hill has great sandwiches, Carolina Inn has the best brunch, and Linda’s makes perfect sweet potato tater tots. In Kannapolis, Sweet Pickle is the best lunch. Kannapolis needs to step up its game as the next best places require going to Concord such as for Rosario’s pizza. 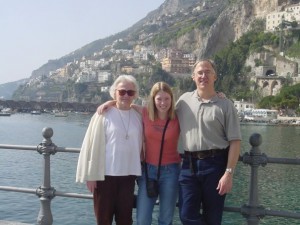 Kelly and family in Italy.

Where was the best place you have traveled so far?

Seattle and Montreal were the two most fun cities for work. Both were locations for the Society for Research in Child Development conferences. They are expensive places so we packed in graduate students to save money on the hotel room. Both cities were fun to explore besides being excellent conferences in their own right. Personally, Copenhagen and Munich have been my two favorite cities to explore for fun. Italy is where I’d like to retire. I can totally live at the nice, slow Mediterranean pace.

What is your favorite souvenir that you brought back on one of your trips?

Lanyards! Haha no, but I have gotten used to Dr. C keeping our lanyard collection stocked J I have a painting of a frog from Costa Rica that I love. It makes me think of the rain forest and sitting on the beach with a margarita.

Where haven’t you traveled that you would want to go?

I want to go everywhere. I would love to go to China, Spain, and South Africa most.

What is your favorite food?

Pizza! I think….it might depend on when you ask. For instance, while editing this, I am now thinking I should change my answer to ice cream.

What book/movie/podcast are you currently hooked on?

We have been watching The Affair and Narcos. They are very different but really fun to watch. The Affair is about…drumroll….an affair and the families it affects. Many elements of the story, like how they met, are told from both points of view complete with memory distortions. It’s really interesting for someone interested in memory. Narcos is the dramatized story of Pablo Escobar told from the point of a view of a DEA agent tasked with ending the stream of drugs into the U.S. Another good one is The Man in the High Castle. It is an alternate history in which Germany and Japan won Word War II. Very fascinating thus far.

Do you have any pets?

Two cats! Two feral creatures who have taken up residence in my home. No, I love them both, but they are kind of ridiculous. Nibbler was originally found under Dr. C’s porch. She came up hissing and spitting with her siblings. She was the one willing to walk into the crate for food. I took her home, and she has traveled with me through graduate school. She loves sitting on my lap, stalking birds and squirrels, and drowning her mouse toys in her water bowl. Chewie is our newest addition. We brought him home on New Year’s Day 2016, and he has acclimated nicely. He is a chill cat who loves catnip, food, and chilling in his cat bed. He is slightly confused by some toys, but he is figuring out everything he can chase (including his tail!). Nibbler and Chewie are not friends yet, but we are hoping for them to become good friends over time.

EXTRA: Add one random fact about yourself, something that may surprise people.

When I was about 4, I was one of the last children to get to sit on Shamu at Sea World. It was a program they used to do every show until they realized that it could be very dangerous for the children. I got to sit on Shamu, and they asked me questions. When they asked me where I was from, I pointed to my parents in the stands. Four-year-olds are not known for their abstract thinking. That was where they had found me!