The results of the infant study are in!

For those who don’t know, we have spent the last couple years working with moms and babies who were exclusively breastfeeding. The moms provided milk samples that we analyzed for fatty acid content. We also determined, from saliva, mom’s and baby’s genotype at a specific location on one of the genes responsible for using one fatty acid to make another – basically taking the fatty acids found in plants (e.g., ALA) and using them to make the fatty acids found in animals (e.g., DHA). People with a GG genotype are thought to not be able to complete this process. Thus, the hypothesis was that the few individuals who were GG would need to eat foods with plenty of DHA, whereas others could eat the plant foods and still have sufficient DHA. As a consequence, we thought that the baby of a GG mom may not be getting enough DHA and that we could maybe see this reflected in recognition memory abilities. So, the babies participated in an electrophysiology task in which they viewed a picture with which they were familiar mixed in with pictures that they were seeing for the first time.

We have completed the first round of analyses. First, the incidence of the GG genotype in our sample was only 7%. So, 7 out of every 100 people need to insure that they eat foods rich in DHA. Second, babies of the mothers who were GG were not able to tell the difference between the old and new pictures. This difference in recognition memory development seems to be specific to mom’s genotype. The effect was not seen when the groups were divided by babies’ genotype. We are currently re-analyzing the data to see what it looks like if we divide the groups by low- and high-DHA milk.

We have completed data collection in the toddler study and are nearly done with the analyses. In this study, we invited 16-month-olds to the lab. We took some blood from toddlers and from moms for genotyping 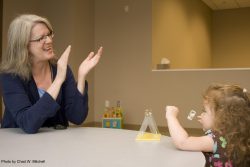 and fatty acid analyses. We were interested in the genotype at one specific location on the gene that is responsible for using one fatty acid to make another – basically taking the fatty acids found in plants (e.g., ALA) and using them to make the fatty acids found in animals (e.g., DHA). We wanted to see what would happen if we gave the toddlers plenty of the fatty acid (ALA found in flaxseed oil) that they needed to make DHA. We played a turn-taking game with the toddlers to measure their memory abilities in the beginning. Then, they were randomly assigned to either flaxseed oil or corn oil supplements for 4 months. They came back in at 20 months of age and were tested again for memory and for fatty acids in their blood. Before I explain the results, I want to thank every family that participated. This was a big study with a huge commitment from you and I sincerely thank you for helping with this study.

Results of the memory testing were astonishing to me. First, to the group as a whole, the flaxseed oil did not make a difference. In fact, it appears that the corn oil group had a slightly higher average memory performance at 20 months. BUT when we divided the groups by mom’s genotype, the story was much different. It appears that when moms were GG, the toddlers were not doing well on the memory tests in the beginning, but after 4 months on flaxseed oil, the toddlers’ of GG moms saw an improvement in their memory. The surprising part is that it was mom’s genotype that was important: we did not see the same thing when the analyses were based on the toddler’s genotype. So, even at 16 months of age, mom’s genotype is influencing memory performance.

Since we did not control the way the babies were fed in this study (some were breastfed, some were formula fed), we are assuming that this relation is an indication of prenatal influence. That is, mom having fewer fatty acids available during pregnancy makes a difference to the baby’s brain that is evident into the second year of life. Thus, it is very important that we identify moms who may need to insure that they get enough DHA during pregnancy. We are currently writing a grant designed to identify these moms and work with them before the babies are born to see what effect that will have on baby.