We hope you are all having a great summer. It has been an exciting year for us graduate students. Grant and I attended two major conferences in March and April. The first conference was the Society for Research in Child Development (SRCD) in Philadelphia, which covered the developmental and psychological side of our work. The second conference was Experimental Biology (EB) in Boston, which covered the nutritional and biochemical side of our work. Thus far, there isn’t a conference that covers everything that we do, but its getting better every year! I got to listen to talks that involved nutrition at SRCD and talks about cognition and development at Experimental Biology. This is very exciting for those of us who know how important nutrition is for the brain.

This was also an exciting year for me as I got to give my first talk at a major conference. I gave a talk on the Maze (see the picture to the left) that we’ve been using with children 7 to 12 years old. Some of you are familiar with how much fun the maze is, but I got to give a talk about how it is also a good measure of planning in our age range. The maze is a brand new idea that we have been testing as a better measure of planning than some of the other measures that exist. First though, we had to demonstrate that it measures similar things to the current tasks that everyone knows so that people will take the maze seriously. We were excited to be able to report that it did! The maze is similar to those other measures, such as the Stockings of Cambridge on our CANTAB computer tests, but may also provide even more options for understanding how planning develops. We are looking forward to analyzing the brain imaging data we get from the near-infrared spectroscopy (NIRS) system (the cool cap in the picture to the right). We are hoping that it shows how well the maze captures changes in planning abilities that are related to nutrition and to development.

I was very nervous giving my first talk, but I had great support from everyone in the lab. They listened to my practice talks multiple times (they could probably give it themselves!), and Dr. Cheatham and Grant were at the talk in Philadelphia. We had a great audience, and people asked good questions. That was a good sign that people were interested in the maze. We’ve had some emails since the talk as well, and hopefully we’ll have even more to talk about soon.

I thanked all our wonderful families at the talk, but I want to do it again because without you we wouldn’t be able to test out these new ideas and present them to the world. I was glad I was able to tell everyone how much people like the maze, and I hope all of our families enjoy coming into the lab as much as we enjoy having you! 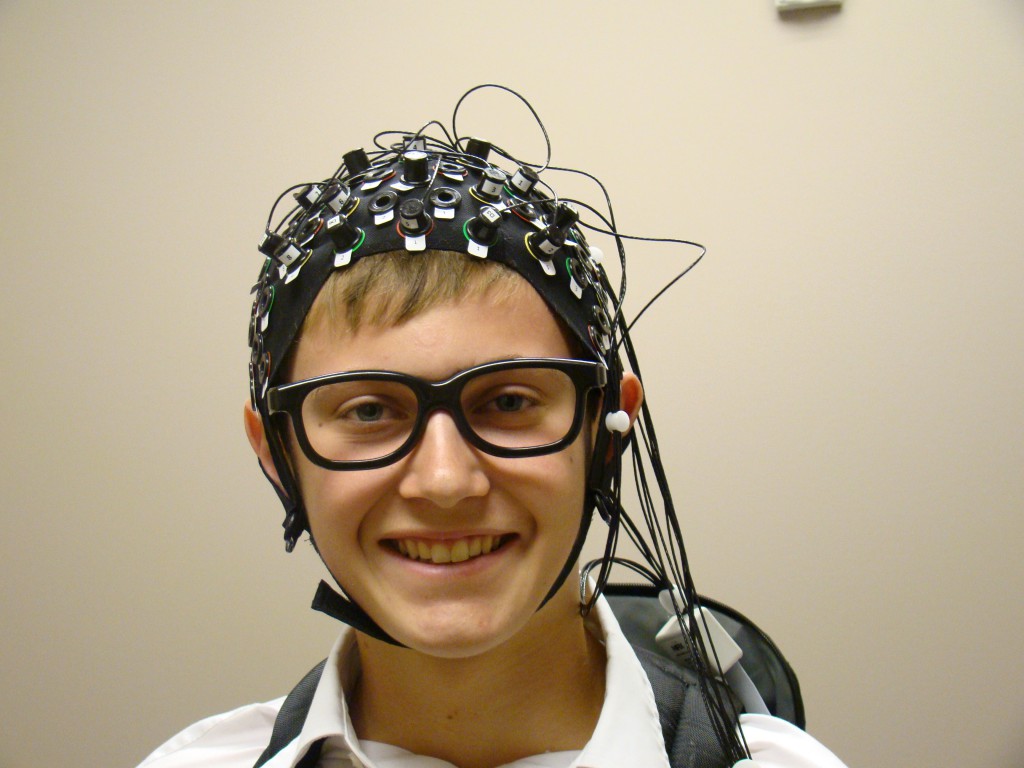 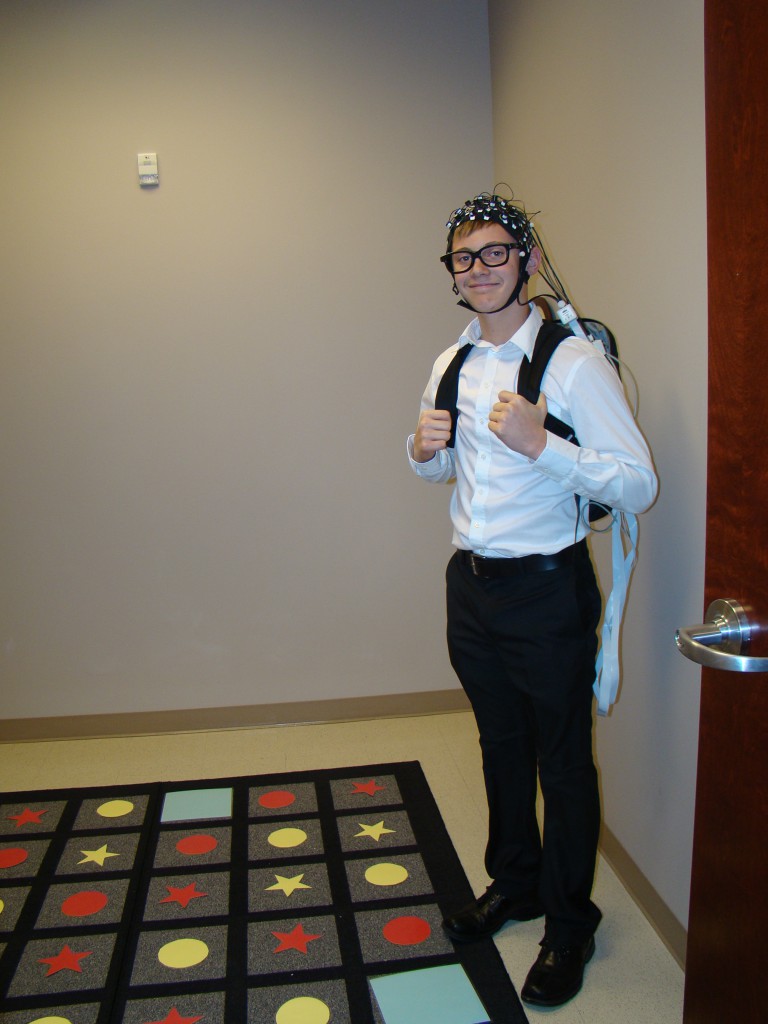 I can’t believe my second year in the lab is coming to a close; it sure has been an exciting second year! I finished my first project using an animal model, and I hope to translate the work to the side of the lab that is performing into a translational study in our human population. So, there is the year looking forward!

As Kelly mentioned, we got to attend two major conferences in our field. I knew when I began my tenure in the Cheatham Lab that I would be bridging multiple fields of science as we attempt to cover the interactive properties of nutrition, cognitive neuroscience, and the developmental psychology of behavior. Our first conference covered the developmental aspect of our work, followed by the trip to EB where I was fascinated by the talks in anatomy, physiology, and immunology, as well as nutrition. Attending these two conferences in close proximity to one another allowed us to see colloquia on some of the same topics, but from points of view and approaches to the questions that were very different at times.

Two of the most notable adventures I got to take was a talk on brain anatomy provided by two Nobel laureates, and a presentation on the final day from a group of researchers who went on a mission to space to study rats growing up in zero gravity. Neurolab is a NASA Spacelab mission with multinational cooperative participation dedicated to work on the nervous system. Because the nervous system of every animal on earth is developed under 1G (gravity), taking the trip to space to study development under 0G presents a unique opportunity. The unique insight into the change in developmental milestones for rats in zero gravity from the space mission was an eye-opening experience to say the least. The opportunity these scientists had to approach the question from such a unique angle is priceless to us in the developmental sciences, as we think of new questions to ask and ways to explore them. Hopefully, the Cheatham Lab can plan for a trip to the moon in the near future! Another unreal experience I had was to attend a lecture from and talk with the Nobel laureates, where they provided a lot of support and motivation to the young scientists, pushing us to become outstanding scientists ourselves.

These conferences were also a great introduction for me into attending conferences in my field. Along side the talks on state of the art research in my field, I was able to meet with and network amongst the big names in each field, and those I hope will be future colleagues. It is an exhilarating experience and a lot to take in, but I could not have enjoyed my time at both of these conferences any more!